A small update on my patterning and armour making process so far.

I’ve finished patterning the gauntlets. The gauntlets were patterned in the same way I patterned the breastplate, just this time I was wrapping my arm in plastic wrap and painters tape. I drew the pattern on as best I could while it was on my arm and then refined the outline (making cleaner edges) once I took the pattern off my arm. After this I transferred the pattern onto EVA Foam. After this I taped the seam up and put it on to make sure it would fit me (Always test as you go!). This was the result.

I’m planing on making the gauntlet zip up but I will explain this further when I have overlaid it with worbla and am ready to start the process of doing that!
Next I patterned the raised details which can be seen as the grey colored sections on the reference image. I had a minor melt down half way through making these when I self convinced myself the gauntlet wasn’t bulky enough (It sounds stupid but WOW armour is known for over emphasizing things like shoulders, lower and upper arms, boots and yeah in some cases boobs!) because of this I dropped making the gauntlets for a day until I cam back and realized the raised details would bring the bulkiness up to standard I might just have to make the gauntlets slightly wider now so they come around my arm properly. Which I didn’t mind having to do so I continued making the raised details and they look like this!

The was all going so well… And then my hot glue gun died on me. And I don’t mean one of those easy to fix in a jiffy deaths.
The trigger was at first stuck and wouldn’t move so I eventually forced it to and it broke so its now got no tension what so ever and will no longer push glue forward. As well as that glue is now getting clogged (I guess?) at the end of the gun and is literally seeping out of any part of the gun it can like seams in the plastic. It died in a hot mess.
So I threw it out and continued gluing the raised details together with wood glue (Which is so much cleaner than hot glue and I hate myself for not doing that first). I do however need a hot glue gun to glue the raised details to the base, this is because of some of the award angles the details must be glued on at so that layer properly.
Once this is complete everything will be covered in worbla.

Next I started on the thigh armour. This was really difficult to pattern, I ended up asking my mother to help wrap one of my legs in plastic wrap and painters tape! Once I was covered I marked certain spots to keep track of where the armour would sit. I then carefully pulled the plastic wrap and tape mess off and then stuffed clothes into the cast of my leg so that it would maintain shape while I drew the shape on. Once I drew the pattern on I cut around it and tried it on. 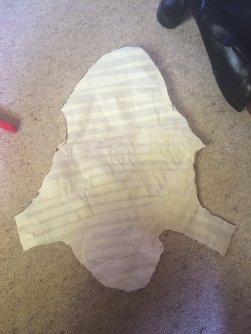 I have since cut the pattern out for one leg and have found that the top of the leg armour needs to be re-shaped. I’m not going to do anything else with the leg plates until the breastplate and belt is made because I can then estimate how high they need to come up and re-shape the top accordingly. The top will then clip onto the belt with a small safety buckle.

I’m heading to Nelson tomorrow to pick up some supplies like a Dremel and other things I haven’t bought yet or have forgotten to get. I really don’t want to be spending too much money after tomorrow as I’ll need to be saving up for my school formal dress soon which is going to be even more money out of pocket! I’ll have an haul post up tomorrow or Thursday showing what I bought as usual.
And I’m back at school this Thursday! My last year at college before the scary but exciting University stage of my life! Really pleased that I got all of my first choice subjects this year, which is really rare as my college caters mostly to the science students who attend so all of those subjects have their own subject lines and the arts are pushed onto lines containing other art subjects making it hard for art students to get all their first choice subjects. No subject clashes for the first time in two years! Yay!
From now on I’ll be stuck to working on weekends and after school, I am determined to get this costume finished well before Wellington Comic-Con because I really need to make my other costumes too!

Thank you for reading and I will be keeping WordPress updated on all my costume progress.
-Nivera

Having only arrived back at home in the past 3 days and only being in NZ for the past 6 I was extremely excited to start on my newest costume,the Demongaze Death Knight Armour from World of Warcraft.

I started patterning on my dressform by using the typical armour making technique by covering the area I wanted to pattern in glad-wrap (Plastic food wrap) and then covering that with painters tape. The glad-wrap acts as a barrier so they you aren’t directly applying the painters tape to the dressform. This way it comes off easily and maintains shape a lot better. The painters tape then acts as your pattern paper, which you draw your patterns on with a vivid marker pen.

I swear the WOW community is the best when it comes to easy reference images! I was luckily enough to be able to find a 3D movable image of the armour I’m working on. The link to that is Here however I’m not sure if it will work on mobile if you wish to view it on that platform. You can also un-equip armour which meant I could take off the shoulder armour and helm as they were in the way of me seeing the breastplate and back plate.

I made a quick (poor) sketch of the armour before starting the patterning. This just helped me to plan out the order I would be making things and how they fit together and to work out seams ect. 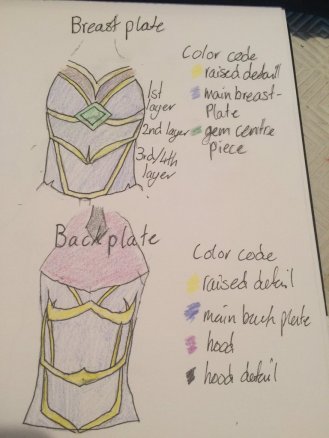 Once I had the page set up and zoomed in on the area I was patterning, I set to work.
I started with the breastplates lower section (nicknamed ‘the under boob or mid tit plate’) I can’t find the patterning progress for this plate and that’s probably down to me stuffing up on the first attempt which is fixed now.

I’d just like to quickly say that I’m not bothered about pinning the foam in this build as everything will be covered in black Worbla anyway, had I not been covering it I would be a lot more cautious about this as it does leave a marks and they’re hard to remove.

Next to pattern was main breastplate (or the booby cup as Kumui cosplay would call it!) I will be shaping it with a ball ornament to get a round shape in needed places.. The piece then merges up to the shoulder seam. I’ve left this piece of the armour as painters tape because it will be made from folded Worbla (two layers) this is because shaping foam to that shape could be difficult, the double layer just makes it sturdier.
I also patterned another section of the breastplate which comes up from the center of the under boob armour piece which goes up to meet with the end of the main breastplate piece making a ‘V-neck’ shape when mirrored. (Better photos of that later on)

Next is the 3rd layer of the breastplate which comes off the 2nd layer. I was really careful patterning this piece as I had to make sure it would be long enough to meed the belt but now be so long that it exceed where the belt would sit. And I think I got there!

And that is the breastplate patterned! I only had the backplate to work on. I started with the top which I made sure to connect with the shoulder seam on the breastplate. I then continued with the 2nd and 3rd layers using the same techniques. 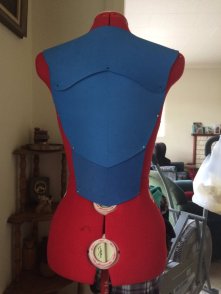 After finishing the backplate I went back and made foam copies of the ‘V-neck’ piece as I realized it wouldn’t need to be made from folded (two layers) of Worbla.

And that is what the front looks like! The painters tape section will be mirrored on the other side with Worbla so you’ll just have to be that little bit imaginative for now! 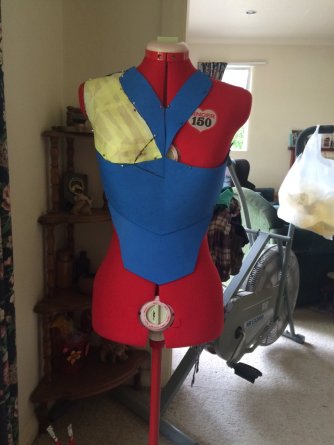 Above is the finished front and back armour pieces.

The bottom two layers of the breastplate and backplate need another layer so that I can add depth details but I will explain that more in my next post. I’ll be getting sculpting materials Tuesday so that I can add the Worbla over top of the foam and start the molding and shaping process.

And that’s the first official progress report on this cosplay.
Thank you for reading
-Nivera