This pattern was defiantly the easiest of the three patterns I choose to use when making foundation garments. This is the second pattern from Simplicity 9764 the other pattern being the crinoline I made earlier.

All of this is stated on the packet but here’s a quick run down. 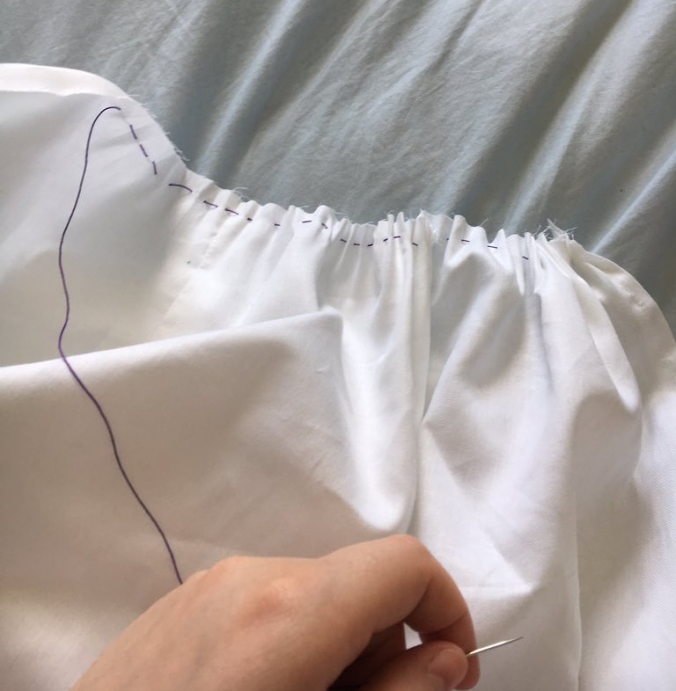 After sewing two lines of hand stitching I gathered it down to my waistband size. 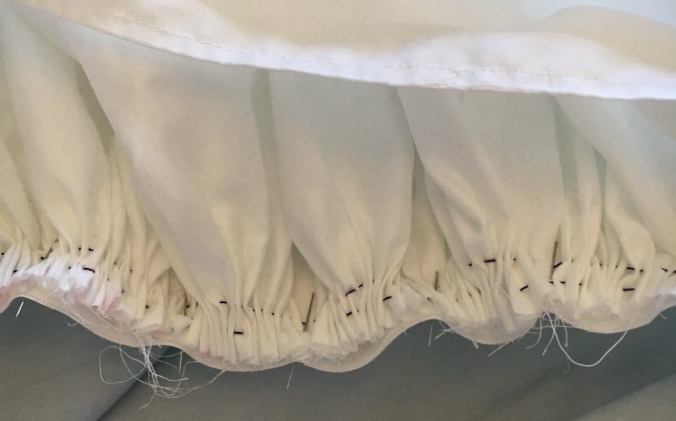 And then the waistband was pinned in place.

The petticoat fit really well and looked like this with the waistband sewn on.

I then put it onto the dress form over my crinoline so I could measure the drop the netting would have. The mistake I made here was that I didn’t measure it while I was wearing it, although my dress form is set to the same hight as I am the crinoline sits just that little bit higher on me.

At the time I worked out that the drop would be 9 inches including seam allowance. I marked everything out with a fabric pen and then I cut cut my netting on the fold in 9 inch widths three times which equaled 18m of netting in total. 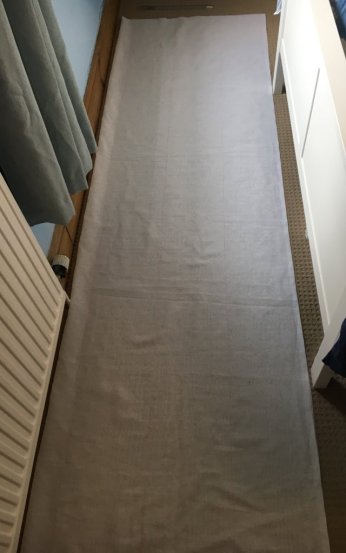 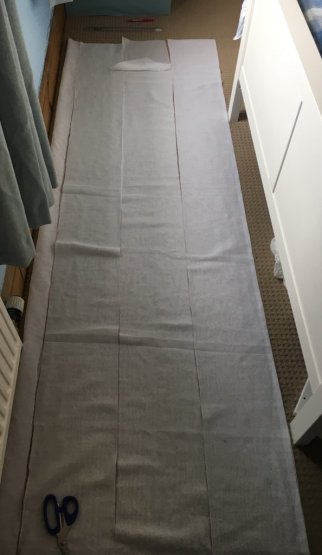 I then sewed the ends together creating one long pain in the ass. I had to hem this… It took a long time even with my foot down all the time. 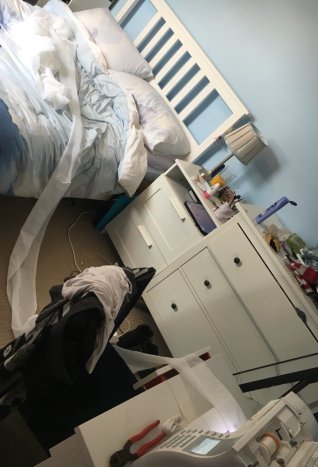 Then it had to be gathered down to 4m. Which again meant hand gathering because I hate myself. Thank god for Netflix. Once it was all gathered down I pinned it to the bottom edge and sewed it on.
Finish by sewing a pair of hooks and eyes onto the waistband and down the opening (optional) and you’re done!

It took me another month to get around to actually ironing out the whole petticoat and I’m so glad I did. It looks amazing. 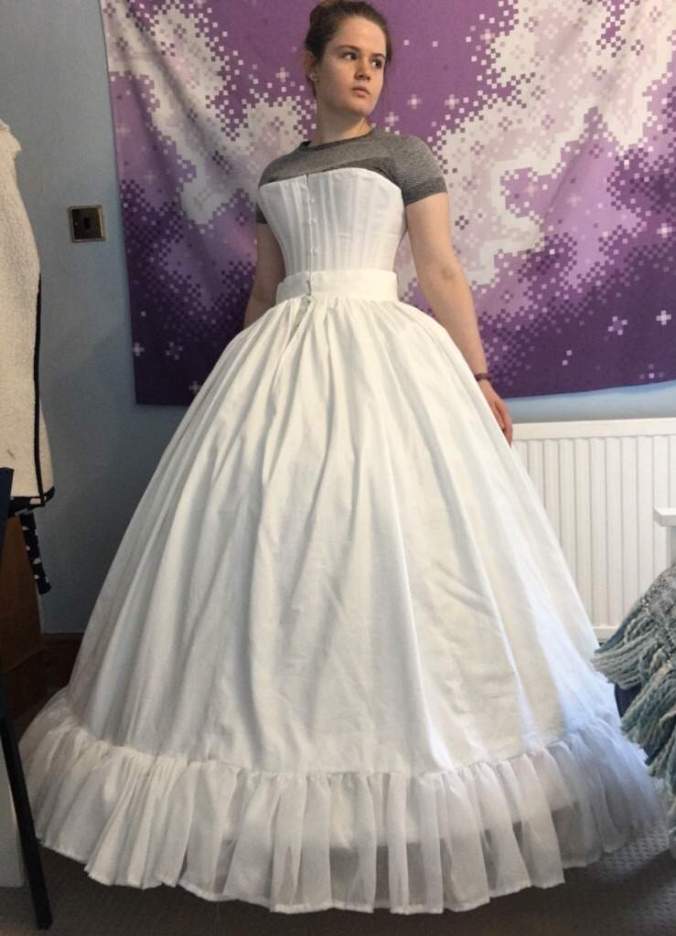 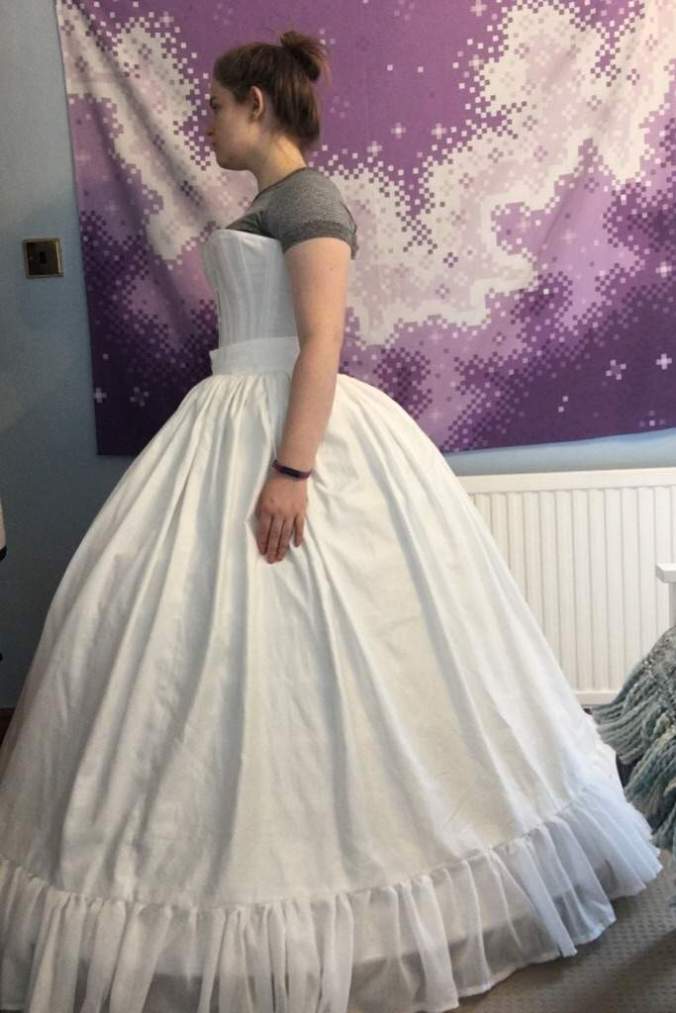 It was so nice to finish off these undergarments with something easy. I do wish I had made the drop and inch or two longer I don’t think it will make a huge difference when the ballgown is on it. The main thing is its covering the hoops and I won’t have that dreadful ringed look like I did on my 1500’s project. One thing to note is that all together its beginning to weigh up, its not something that bothers its just there. I don’t see myself getting tired wearing it for long periods of time but it certainly has a weight to it now than previously with just the crinoline. The skirt of the ballgown will add to this but overall I don’t think it will be a big issue. I love this petticoat I’ve spent too much time twirling in it, its so fun to wear.

I’ll be talking more about future projects in my next post as well as University which has come around so fast!

As always thank you for reading.
-Nivera