I honestly didn’t have high hopes for this, corsetry seamed so intimidating. Although I own Norah Waugh’s ‘Corsets and Crinolines’ I decided it would be easier for me to use a bought pattern rather than attempting to scale and size one myself for my first time. I decided on Simplicity 1139 which, like the crinoline pattern is apart of the ‘Fashion Historian’ collection. The corset and the other patterns from this particular pack are heavily influenced from the Civil War Era making them the perfect for my 1860’s ballgown. 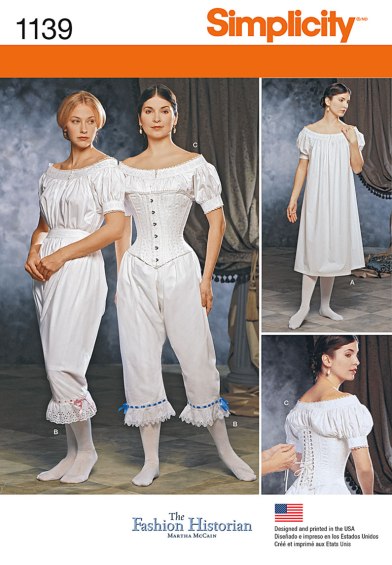 All of this is stated on the packet but here’s a quick run down.

The corset is made up of seven patterns, six are cut on double folded fabric and one pattern (the busk cover) was cut four times. 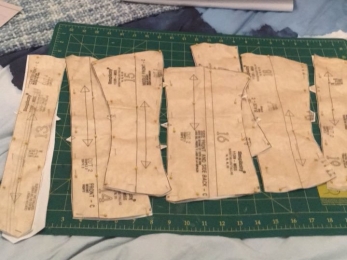 This being my first corset I actually expected there to be more pattern pieces. In my mind when I looked at a corset I imagined for each boning channel there would be a seam but I quickly realised I was wrong and that boning channels were sewn onto the corset panels as well as over the seemliness.

Once the pattern pieces are cut out transfer the boning channel lines over to the fabric using your fabric pen. Making sure not to mistake these lines for the grain line as some are diagonal and don’t follow the grain. I made the mistake of sewing my panels together before realising the boning channels needed to be drawn but this was an easy fix using the paper patterns as a guid and drawing them in that way. 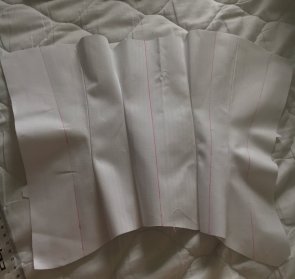 You can see the boning channel lines marked in pink in the above images. Making sure to iron the seams out flat as your sew them, it’s really important for this project.
BUT REMEMBER fabric pen ink disappears under heat so it will disappear if you iron over those channels you’ve just drawn. Be careful! I almost made this mistake again but remembered the issue from my crinoline experience.

Next get your twill tape and pin it over the seams on the RIGHT side of the fabric. Cutting it into correct lengths as you go. You’re then going to sew on either side of the twill tape as close to the edge as you can get. This will form the boning channels. Be sure not to sew the top or bottom ends up as this will be done later.

Then repeat the process and pin the twill tape centred over the the boning channel indicators you’ve just drawn. If you were like me and used a bright colours pen you should be abled to see the lines vaguely through the twill tape making it easier to pin centred.
Technically you can pin the seams and the channel indicators at the same time and sew the all at once but I found doing them in sets was easier to manage!

Once all the twill tape is sewn it will look like this! Now this is where you have an option and I strayed from the pattern, kinda. You have the choice of using a metal grommet punch and putting metal grommets into your corset for eyelets. However if you’re going for historical accuracy and making a costume that predates the 1820’s then I suggest you read Why metal grommets are the visible panty lines of historical costuming

Mark the eyelet/grommet placements out with your fabric pen, you should have 30 of them if you’ve measured according to the pattern instructions.

Then begin punching in grommets or sewing your eyelets. Make sure to do the eyelets one at a time or they can stretch. You can use fray check on them before sewing but I didn’t find it necessary this time round. 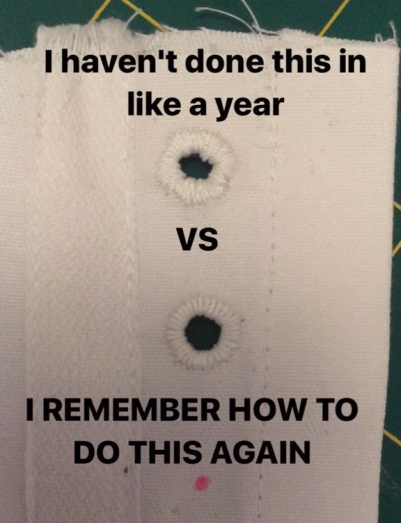 I found that I could do one every 10-15 minutes without distractions. 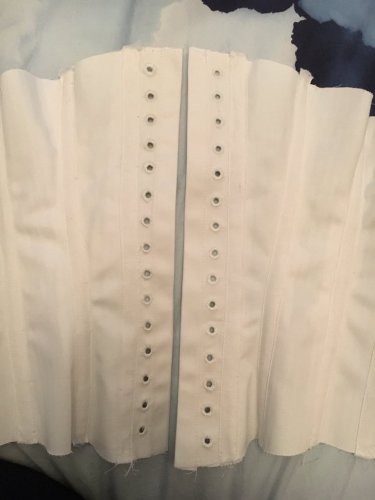 They are very pleasing to look at once you’ve finished them though! Next up is inserting the busk. This was my first time using a busk and I find them so cool!

The instructions will tell you to mark the top of each side (stud and loop), you do this by getting some tape putting on each end and marking the letter ‘T’. Simple!

Starting with the loop side mark out where the loops will sit within the seam allowance. Use your fabric pen for this. You’re better to measure everything for this. It has to be exact on either side of the busk or it will not connect and create a closure.

After sewing the patterns together you should be able to slot the loop busk into the seam allowance and the loops will poke through the holes you created. It can then be sewn onto the base corset like so!

The some idea applies to the stud side. Just this time your marking where the studs will poke though the fabric. The instructions suggest you use and awl to open these holes but I used my fabric punch and just matched the hole side to one size smaller than the stud so it could be pushed through the hole but not pop out again. Make sure to fray check these punched holes.

Repeat the process of sewing it together and then onto the base corset. Last but not least. Sew along the bottom edge within your seam allowance and trim any excess fabric. Then pin and sew bias tape along the bottom edge. There were a few places the needle didn’t quite catch the tape on the other side (wrong side) and I just fixed these up with needle and thread being carful not to show stitches on the right side. The only reason I didn’t unpick it and re sew it on again was because I didn’t want to damage my fabric too much and the bias tape looked great from the front the first time round! 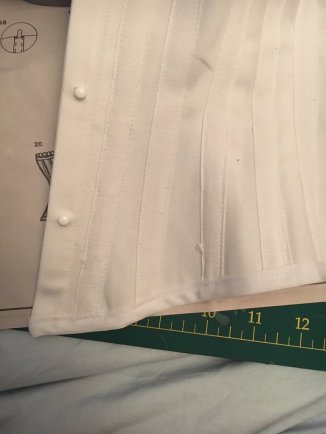 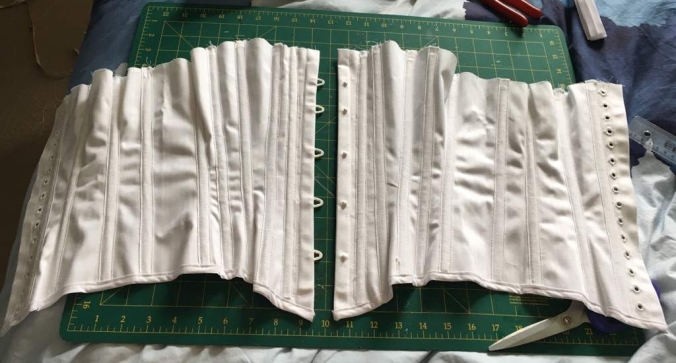 Then cut your boning to size and insert it into the channels. I found the putting heavy duty duct tape on the ends unfortunately showed through the twill tape and left weird dark patches on the channels so I didn’t do that this time and so far so good, no boning has torn through the casing.
Repeat what you did with the bias time on the top of the corset and you’re finished!
Lace yourself up or get a friend to help cinch you in and your corset is good to go! 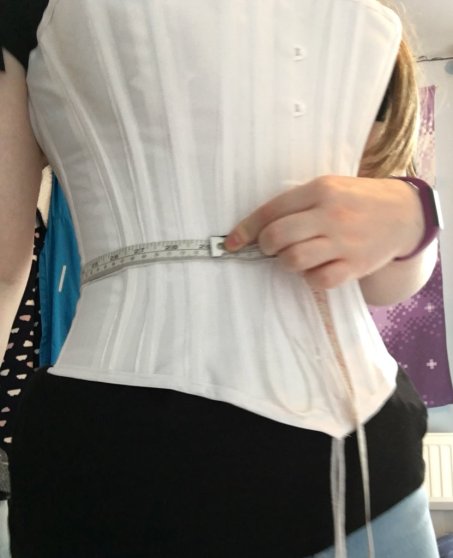 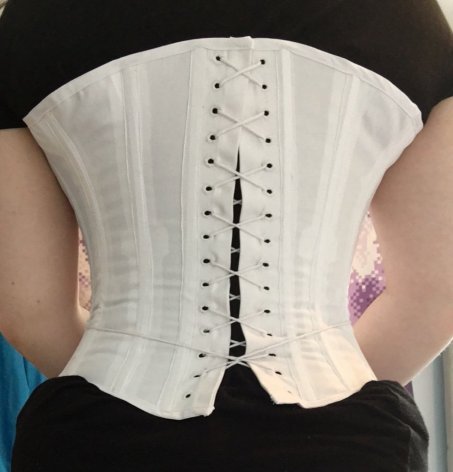 The corset if I’m honest is too big for me. It docent cinch my waist in at all, the bust area is too large and theres no room for me to cinch it in smaller as the eyelets meet centrally down the centre (not shown in the above picture but I have since achieved that). I fear attempting to pull the corset tighter would ruin it. I’m disappointed it doesn’t cinch me in further at best it just flattens my stomach.  It looks as though I won’t be doing a shoo for this costume until next Spring so I may make a new one in that time and possibly sell this one as its of no great use to me.
My next corset will be smaller and likely patterned from the book ‘Corsets and Crinolines’ Unless I can find my other corset book which I know covers this period exclusively.
Despite the size issue I’m still really proud of how this turned out.  I’ve had many complements on my social media on it which is always great to hear! I think it also shows how much my skill has improved over the last year too.

This corset along with my crinoline and a petticoat (post coming along soon) will be worn under an 1860’s ballgown ensemble. Unfortunately my sewing machine needs servicing and I won’t be able to make any further progress on it until the Christmas holidays. But hopefully my mother will come and visit me during term and will bring along my serviced machine so I can continue to work on things in my dorm while at Uni! I will have a fabric selection and embellishment choice post coming along soon too so thats one update on the dress at least.

I’m really enjoying the Fashion Historian pattern line and I’d love to make some more things from it. Perhaps a pair of drawers to be worn with the rest of the undergarments.

Thank you for reading!