Costume Status: COMPLETE
Below are links to each individual post in order.
Part 1, Part 2, Part 3

In my last post which was way back in September of 2015 I was yet to make the hood, mask, boot covers, gauntlets and possibly a weapon.

Boot Covers
These were relatively easy to make, simple craft foam covered in fabric which was hot glued into place on the other side.

I started off by making the pattern which I made by wrapping my boots in plastic wrap and painters tape and then drawing on the shape of the cover which looked sort of like an upside down bottle.

I left about half an inch of allowance on the fabric so I would have enough room to turn it over where it was glued down with hot glue. The base is black craft foam. I’m still surprised at how clean they look with little to no puckering or creases.

I also decided I wanted the foot covers as well so I patterned them in the same way that I made the top half of the covers wrapping plastic wrap an painters tape yet again.
And they looked good.. in the patterning stage.

I thought everything was going so well, they fitted so nicely and looked perfect. I think my mistake here was using the craft foam as a base, if I had used just the fabric I think they would have sat so much nicer.

Comparison.
I would have liked to have an O ring between the two covered joining them like the in game model but it was just to difficult with very little time.Both the top and bottom covers were attached with elastic. Unfortunately the foot covers didn’t make it to the convention as they slipped all over the place and I was scared of loosing them in the halls.

Hood and mask
For the hood I think I traced the hood off my dressing gown which was semi close fitting or I used the hood pattern from Simplicity 1771. I can’t remember! Either way I hemmed all the raw edges and sewed small black domes in five places along the bottom edge of the hood. Two at the very front, two in the middle and then one at the back. I then sewed opposite domes onto the body suit to correspondent with the ones on the hood creating a detachable hood. I would also like to mention that I had to use some left over black medium weight cotton for the hood as I didn’t have enough black spandex left over. This annoyed me as my black fabrics didn’t match!
The mask was made in the exact same way as the one for my Nightingale cosplay. I literally traced that pattern onto my red cotton, hemmed it and sewed the elastic and hook and eye set on and it was finished. Again this was a dumb move as the cotton didn’t stretch and it hurt to wear as it pressed on my nose after a short amount of time. 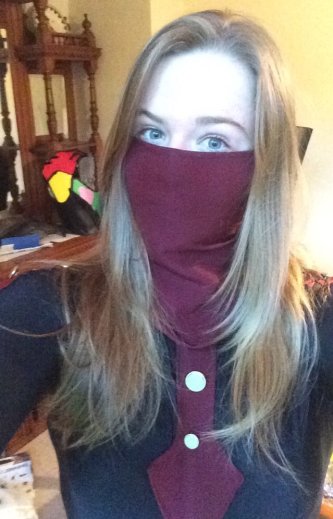 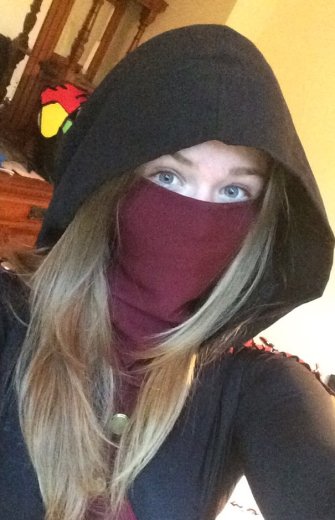 Gauntlets
I didn’t make these in the end as I ran out of time (night before con crunch). I was going to wrap craft foam with my red fabric again but wasn’t sure how it would close so I gave up…

Weapons
I did make the Blade of Woe, I even stated up until 12 the night before the con completing it. However, it got crushed in my luggage on the way to Auckland. Here’s a progress pic!

This has to be the worst Pepakura file I have had to use. The there were numbers to match on the file and it was literally a guessing game using the red line system on the program. I don’t know where the blade ended up after the convention hopefully somewhere never to be seen again.

November 2015 Photo Shoot
I forgot the belts when we did the shoot but oh well, maybe I’ll re make this cosplay next year.

Notes and things I would change if I made it again

And that is my Dark Brotherhood Armour Cosplay!
If anyone has any questions about any parts of this cosplay then ask away! I have no doubt forgotten to write about some things!