Another cosplay from Skyrim which I totally forgot about for a few months. I was originally going to be wearing this to Armageddon Expo Auckland in October this year but got side tracked with other costumes and my portfolio so I decided to make it when I had time to. I did get started on it which is great. I only really have a few touch ups to do so it’s not going to need a lot of time on it to have it finished.

Here is how the robes look in-game. 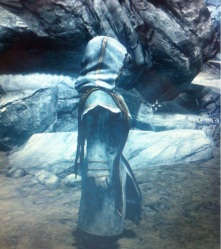 I love the robes so much and will always make my character carry a set of the robes around with them despite my characters never being mages. It’s so pretty and looks so cute on female characters

Because at the time of me making this costume I wasn’t working on my portfolio I haven’t got a lot of progress photos of me making it. I do have a few though.

The materials I used were 5m of white fabric (I can’t remember what sort it was but it was heavy so that I would drape and was reasonably thick) I also got 5m of lining material in the light blue color I wanted the robes to be. 2.5m of black cotton (I think it was a blend of something) which was to be used as the scarfs. End of the roll shiny gold material (same sort of material as the lining just not as transparent) I think the gold was about 1/3 of a meter and had a small stain on it so it only cost $2. I also bought a lot of gold bias tape to be used on sleeves, hood, cape and scarfs. And of course I bought a pattern (pictured below) it was a men’s pattern  so I had to do a lot of adapting to make it fit me. To dye the white fabric needed to be dyed so I had to buy 5 packets of dye to dye it all. That process can be seen in the second photo below. 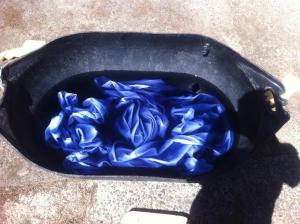 My weapon of choice for this cosplay (when I eventually get it finished and photographed) was the Dawnbreaker. It just seamed fitting and would look nice with the robes. I used Pepakura to make the sword and below is an unpainted comparison.

The similarities are awesome I absolutely love Pepakura for making prop weapons. The link to the download of this Pepakura file is here.

Because I don’t have any photos of the making process I’m just going to post pictures of the robes in the near finished condition they are in now.

Things left to finish for this cosplay to be complete

Now I’ve listed all of those things out it looks like I do have a lot of work to do but really those are all small touch ups I need to do. It’s not a big job and could probably be done in a weekend with the right materials.

Another costume I can add to my portfolio yay! I could have this finished this year and it will be my priority after I have completed the current costumes I am working on. I want it to be done this year so I can take all of my official portfolio photos before I go to England in December. I can’t wait to be in costume and have them photographed.

That’s all for now I will be continuing work on my Dragon Scale Armour cosplay this weekend and hope to make some serious progress.

Thank you for reading